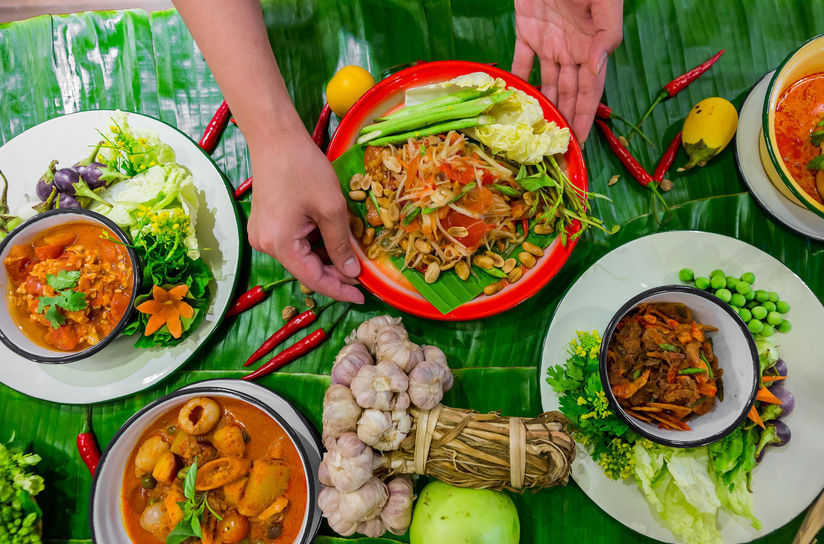 Thais think that meals are an intimate place of communication. During the meal, the main dish is glutinous rice or sticky rice with leaves, eaten with many dishes prepared in different ways, according to the taste of each region. These are soups, curries, stews or fries, salads and one or more basic sauces like fish sauce and chili.

Thais consider food to be the most favorite entertainment. Each region has its own way of eating and processing food: Thai cuisine is actually the cuisine of four different regions, each of which has its own unique trait in their traditional way of cooking. Unique in the cuisine of the Thai people, when processing the food, the Thai people rarely use grease and pay great attention to the coordination of bitter – spicy – salty – acrid taste. These tastes are harmoniously coordinated to make diners feel satisfied, without feeling sick and tired of eating baked, boiled, steamed, smoked dishes, … When enjoying Thai barbecue, you will see rich taste, rich in nutrients. Steamed dishes, boiled dishes with special aroma and sweet taste are meticulously made to make people remember forever. Each dish as containing the whole heart of the Thai people sent into it.

In addition, when it comes to Thai cuisine, we must also mention Siamese royal cuisine in the past. Originally popular only among royalty, it is now widely circulated.

Thai cuisine is influenced by the cuisine of neighboring countries such as China, India, Malaysia, Myanmar, etc.The Northeastern region of Thailand is similar in style to Laos. The northern mountainous region has a Burmese style, whereas the southern part of Thailand is influenced by Islamic cuisine from Malaysia. Particularly in the mountains of Korat in the eastern region of Cambodia.