Thailand is a wonderful country of great things. Not only famous for the tourism industry, Thailand’s cuisine is also a combination of many cultures of neighboring countries like India, China, Myanmar, Indonesia …
General characteristics of Thai cuisine is the taste of dishes extremely rich, each sour, salty, sweet, bitter, spicy food of Thai are very clear. Thai food is processed in a variety of spices and flavors. Although many use but do not cause the mix that each spice, each type of perfume is used in a reasonable and accurate way, weighing measured on each dish. In addition to the usual spices, Thai people also use the herb for dishes such as cloves, saffron, basil, coriander, mint, lemongrass, lime leaves (Kaffir Lime) ginger, galangal … to add flavor and make food become functional food, health benefits. Thai people like sour, spicy so favorite is chili, lemon and lemongrass. 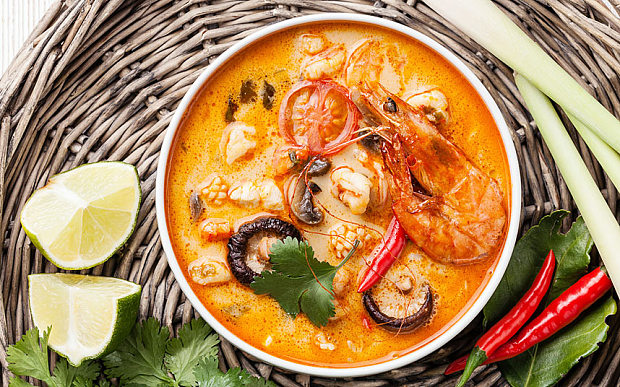 Thai food is generally the same, but each region has its own flavor and processing.

Central food is considered to be the best combination among regions, very fond of eating rice that Thailand is famous for. At the dining table there are usually three to five dishes such as Kang Phed (Thai Red Curry), Tom Yum (Sour Soup), Thai herring, grilled pork … vegetables and fish sauce. Thai food is influenced by the royal cooking style, which is complicated and sophisticated .

Thai people have a traditional culture with spicy and sour and a combination of aromatic herbs in their own cuisine.